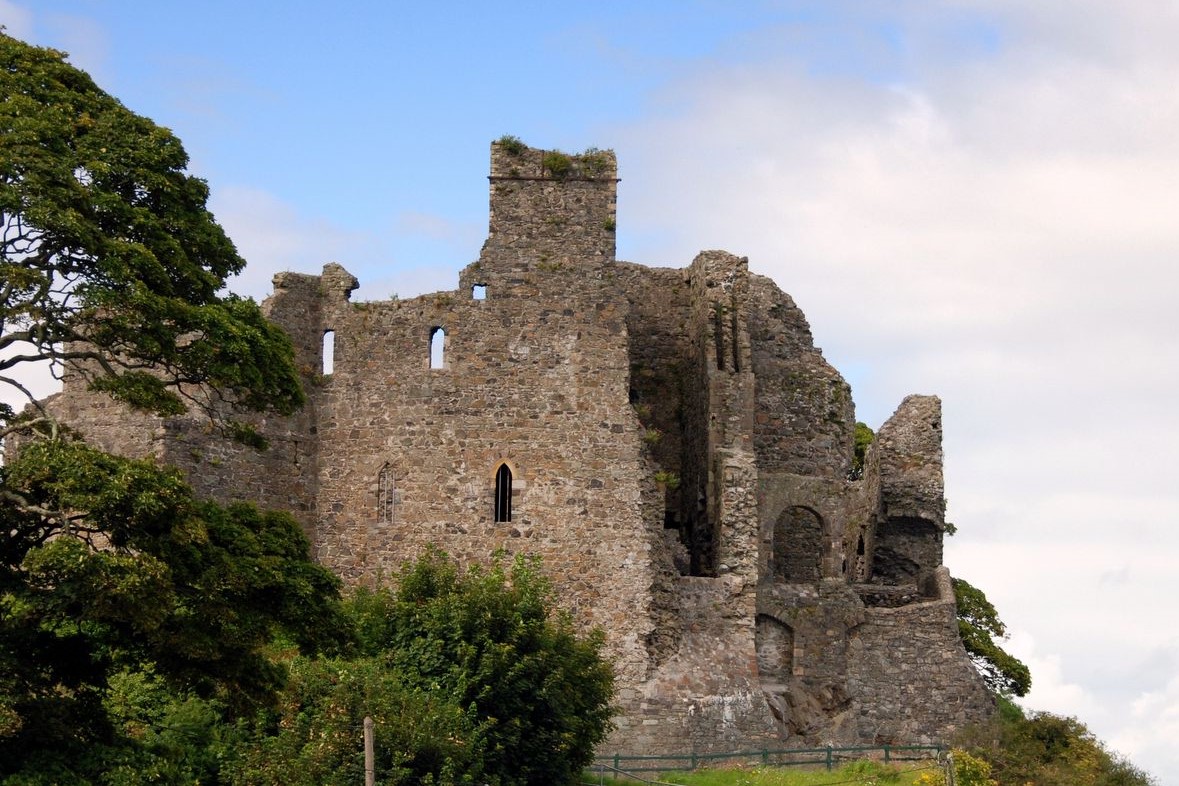 This newsletter is jointly produced by the bodies representing the Carlingford Community, namely:

As you are aware, Fáilte Ireland together with Louth County Council and other agencies is actively engaged with the Carlingford Vision ‘31, Gateway to the Cooley Peninsula initiative. Ireland’s Ancient East’s Manager at Fáilte Ireland, Mark Mohan will be guest speaker at the AGM of Carlingford Lough Heritage Trust on Monday April 11.

This is an opportunity to come along and hear about future plans and what they could mean for the Peninsula. The Forum has been directed by L.C.C. that the application for a bus shelter on the Greenore Rd. should be directed to the National Transport Authority. The Forum is now following up. Congratulations to Carlingford Tidy Towns on their successful application for funding to renew the playground under T&V Renewal Scheme 2O21. 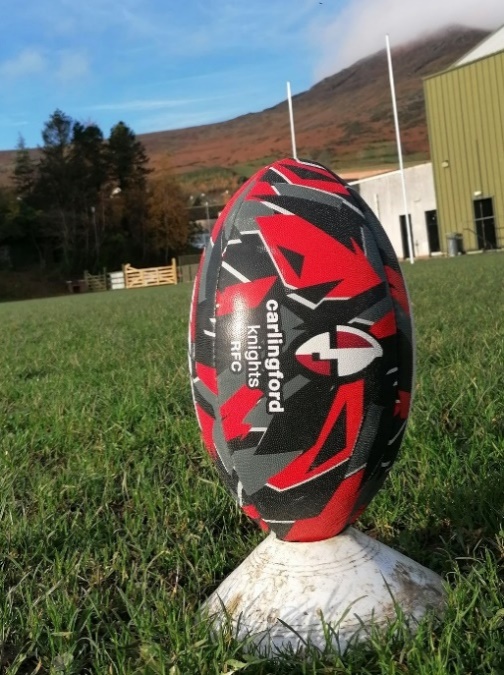 It has been a busy March for the knights. While the national team competed in the Six Nations, all our local teams have been in action around the province. Our under 9s, 10s and 11s have been in blitzes in North Leinster. Our under 13s and 15s sides have been in friendly and cup action.

Our youth girls will be playing challenge matches from the start of April. Our numbers continue to grow as we are nearly at 200 registered players, for season 2021-2022. The club has also been successful in receiving an equipment grant, this means we can get a new lawnmower next month to look after pitch maintenance at the Foy centre.

Everyone is invited to our  AGM on Monday April 11th 7:30pm . If you have an interest in History, Heritage of the local area, and the Lough you are more than welcome to join us. Guest speaker on the night will be Fáilte Ireland’s Mark Mohan with light refreshments served.

For full details of all the Heritage Centres projects and latest events please read our blog which will on our website soon.

Battle of The Greenway

Halfway point on the Greenway is the little bridge over the Two Mile River, traditional boundary between Carlingford and Omeath. The area between the river and Greer’s Quay was the scene of a minor battle in the Nine Years War that may have cost the lives of 40 men. In October, 1600 Hugh O’Neill and the army of Ulster had pulled back out of the Gap of the North near Faughart, and a 3000-strong English army under Sir Charles Blount, Lord Mountjoy, pushed through to supply their garrison in Newry. Heading back to Dundalk via Carlingford on 12th November, scouts told them O’Neill was moving an army over the Flagstaff. Fearing ambush in Fathom, they marched down what is now the Warrenpoint road and crossed Narrowwater by pontoon bridge, camping on Cornamucklagh Hill. The next day, O’Neill was waiting for them in Ballyonan where he had dug trenches and built barricades in front of the ford on the Two Mile River

The English army liked to march in close ranks, at least 20 pikemen across in the vanguard with their flanks. The pikes were fearsome weapons up to 20 feet long, but they could only face in one direction so the pikemen’s flanks had to be guarded by musketeers and halberdiers with cavalry further out. On the narrow road by the sea in Ballyonan this didn’t work. They could only march 6-7 across so they were strung out over more than a mile with supply wagons and cannon at the back, which is what the Irish side wanted. There was little room for the English heavy cavalry, which the Irish feared.

O’Neill’s men were in the woods above the road all the way to the ford. English reports said the Irish waited “at a little plain like a semi-circle whereof the sea made the diameter and a thick wood the circumference, where a river ran out of the wood with a ford of good advantage to the enemy.” The Irish waited in their trench until the English reached the river and then ran away, a classic O’Neill trick. The vanguard company of a hundred or so men charged across and an Irish company came out of the woods, reoccupied the trench and cut them off. Then “from all parts they poured upon us great volleys of shot.” The English charged the trench and there was a bit of pike-pushing but the Irish just pulled back into the woods where they ran along firing repeatedly into the English column. Then O’Neill’s cavalry, which had been hiding somewhere in Ballinteskin, fell upon the rearguard and wagon train, killing many. As usual, they had no intention of fighting to the death: when the English cavalry turned back towards them, the signal sounded and the Irish horsemen all disappeared into the woods. Mountjoy’s secretary was dead as were a number of senior officers including one named O’Hanlon. The whole thing lasted about two hours. English claims about the number of Irish dead can safely be ignored. By Seamus Murphy 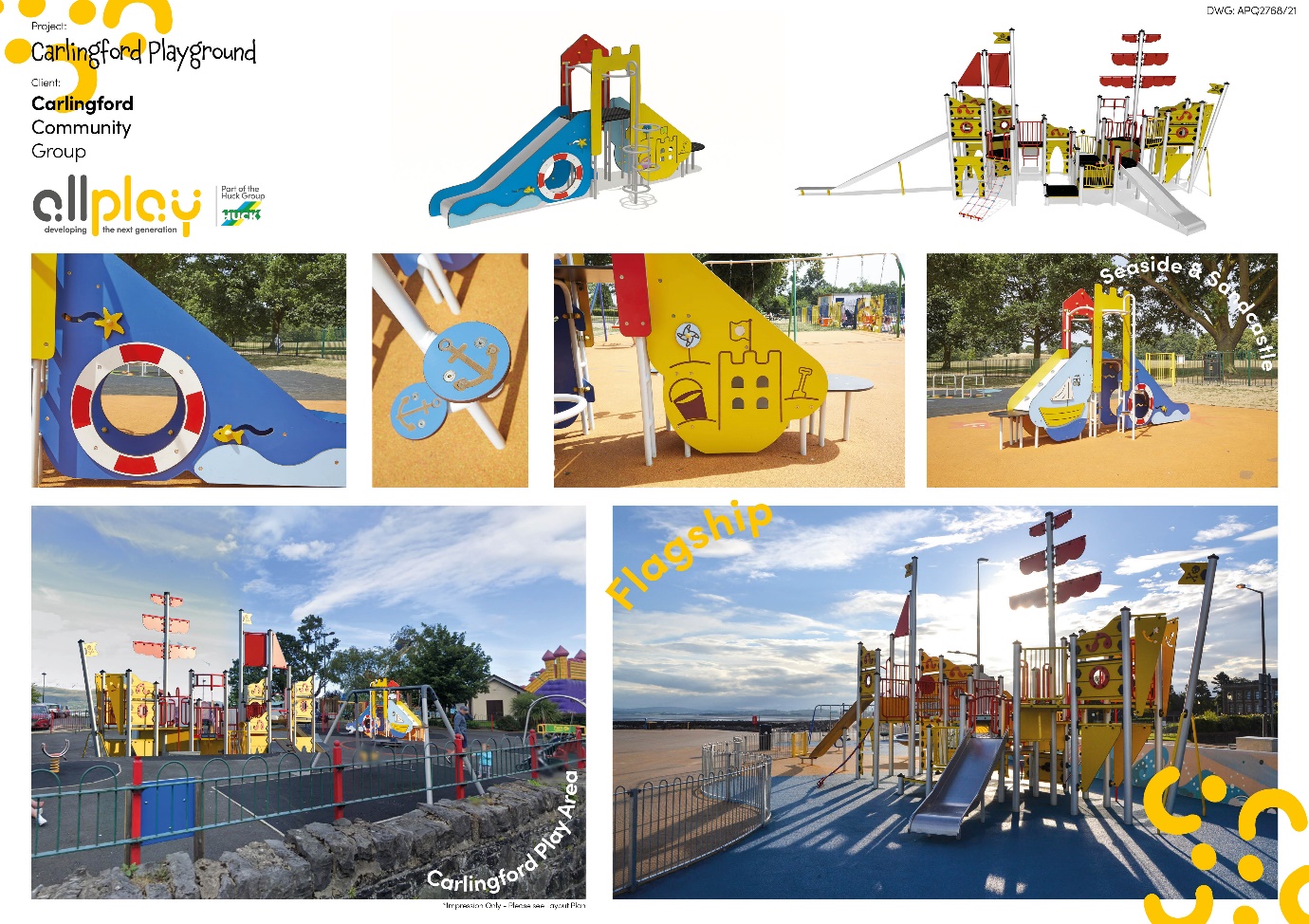 Playground- We found out this month that our application to Town and Village Renewal, to renew Carlingford Playground was successful. Carlingford was allocated 93,755 Euro. The project will enhance recreational facilities in the town and help the village reach its full potential as a tourist destination. Council Management are currently reviewing all successful Town and Village projects and deciding on which to take forward.

In the proposed project we aim to replace the old multiplayer units which are up to 40 years old. These are to be replaced with more up-to-date, accessible units with a nautical theme in keeping with Carlingford’s heritage, and still coordinating with the existing equipment to make a great small Community park which better utilises the existing space in this ideal safe location whilst improving the public realm. Whilst catering for a wider age range than the existing park. For those who live here it will be a nicer place to meet outdoors without the need to get into a car. For those who visit it will be a reason to visit in itself, a free attraction. It will attract families to Carlingford and will generate business as a result.

We have also made a recent application for a Spinner Bowl under the Outdoor Recreation fund.

Don’t forget to apply for the Amenity grant for your Residential or Community or Tidy Towns Group. Deadline is 5th April 2022. https://www.louthcoco.ie/en/services/communities/funding/amenity-grant-scheme/ 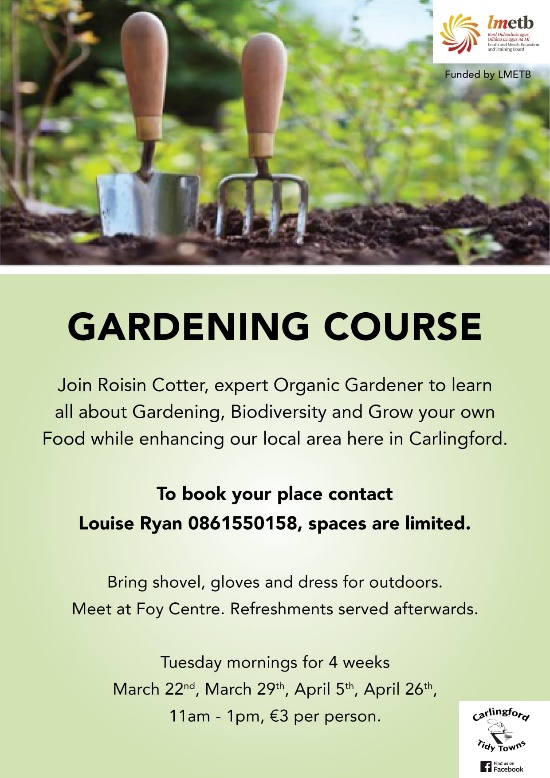 We are running a Biodiversity Gardening Course. The Course tutor is expert Organic Gardener Roisin Cotter. The Course begins at The Foy Centre and the practical aspect of the Course will enhance the Garden at St Michael’s Church. If you do have any Perennial plants that you could divide you can donate them to the project. The remaining dates are 5th April and 26th April at 11am. Phone Louise on 0861550158 to book your spot.

We assisted residents of Dundalk St Estate to make some flower beds and helped install a nameplate for the estate.

The crows are having a field day pulling fish and chips out of the bins along the promenade. We have made an application under Clár for additional closed solar compacter bins for the harbour area in attempt to reduce the problem of marine litter.

For National Tree week we planted native Irish trees with the Carlingford Youth Group, twenty young people were kind enough to help out.